And I have one that is reaching out to important people in her life... in my life.... those that are open enough to listen. She is trying to prepare me for her transition. I can hear enough of what she is saying to understand that.

I see nothing really wrong with her, just by looking at her. I mean, I know that she has an enlarged heart and that she has horrible hips that are painful for her. I know that she can't hear well and her last bloodwork showed her kidneys were beginning to have problems.

But to just look at her, she isn't dying.

She went for a hike in the woods with me on Sunday and it filled me with joy to watch her light up when she saw the lake and just run as fast as her legs would take her to the water and just jump right in. As she left the lake, she hesitated momentarily as she realized the steepness of the hill to get back up to me, but she did it anyway. And her face just radiated joy. It was she and I again together in the woods.... reminiscent of times past when it was her role to search for that missing person and to lead me.

I know she is readying for her transition and she is rallying people around me and letting them know so that when she does go, I won't be alone with it. That is her taking care of me.

I am listening. I'm just searching for the courage to be able to let her go and let her know it's okay. I need to take care of her. 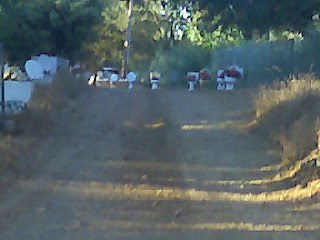 Cruise the middle of nowhere long enough and there will be a site that you can't believe actually exists.... this is a driveway, lined with toilets. In the toilets are flowers. Please forgive the poor photograph - I only had my cell phone with me, but I couldn't pass this up without some kind of photographic evidence that this exists in the world.
Posted by TJ Moutard at 11:12 PM 3 comments:

I had a very long and very difficult day. I thought about writing about it here, but then I thought I needed to refocus myself. So I got out my camera and chased the moon around. I took dozens of pictures (thank goodness for digital cameras!) and got nothing but a white blob. Then I looked up how to take pictures of a full moon (thank goodness for Google!) and went back to work. A few dozen pictures later, and this is the result. 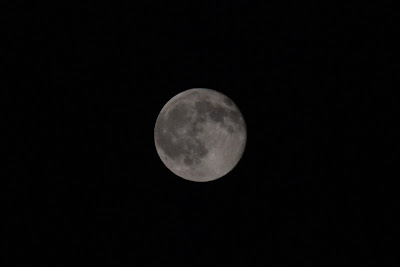 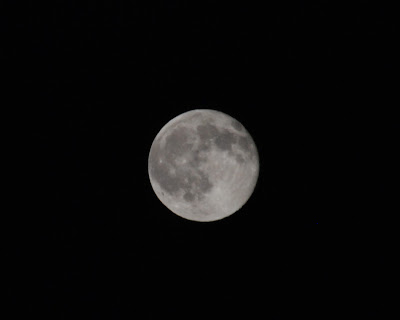 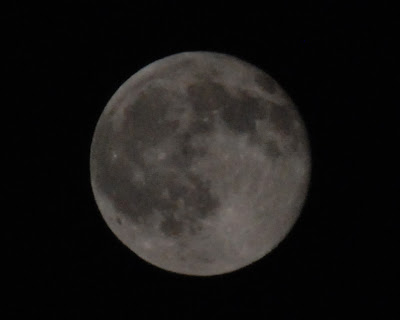 I took all the day's pent up energy that strong emotions can bring and I focused on learning something new and putting that knowledge to use. And for the evening, all my anger, anxiety and irritation are now out of focus and harder to dwell on.

Sometimes you just have to refocus yourself. 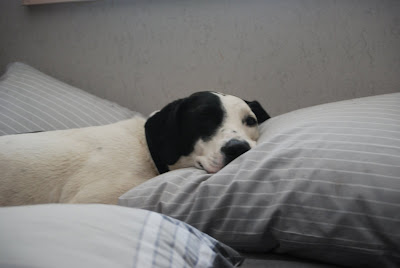 Posted by TJ Moutard at 9:41 PM No comments:

I am once again seeing patients that I remember seeing as puppies getting to the point in their life where we have to say good bye. I can so vividly remember the happy little ball of energy or fluff or fluff and energy coming in for the first times and the owners needing guidance to get through the terrible twos and all the other rough stages to get to their 'perfect' dog... and sometimes they never got their 'perfect' dog, but they could make do, so to speak.

Now, some come in and you can just see it in their eyes. They're tired. They have done what they have come here to do, and it is time for them to move on to their next mission.

They give us so much during their lifetime. Unconditional, unbridled love is often a benefit we get from them. If only we could be so giving of our emotions to them. We wish that they would just 'go in their sleep'... but sometimes that just isn't in the cards. Sometimes we are put in a position to make the decision that it is time.

I get asked all the time, "how do you know it's time?" The answer I give is this. You will know. If you listen. If you tune in. If you pay attention. Your faithful companion will tell you when they are ready. I also get asked, "what would you do if he were yours?" Ahhhh... the eternal question that is actually asking me my permission for you to make the decision - for someone else to you it's okay, which makes it my decision, not yours. I can't answer that question for many people. There are the obvious cases where the animal is dying a horrible, painful, elongated death due to an organ failure that can no longer be mitigated. But a lot of times, that answer is solely your answer. I cannot know what life is like in your household and how your dog or cat fits into that picture and if now is the right time. You know your pet the best. You know what makes them happy. Maybe they can't go on the 3 mile walk anymore -but a walk to the end of the driveway and back is okay with them. I can't answer the 'is it time' question for you. Only you can.

To be able to release our pets from pain and infirmity can be the greatest gift we can give. When we take on an animal, ideally, we take responsibilty for every aspect of their life. And that includes their death.

If you are questioning it, perhaps it is close. Take the time to block out all distractions from your life and sit with your pet. Be prepared to take as long as it takes. Stroke them gently, in all the places you know they love. Ask them. Is it time for you to move on? Do you need help with that? Be open for the answer. Allow it to come.

You will know when it is time.
Posted by TJ Moutard at 10:56 PM No comments:

A great day with friends yesterday spawned an interesting conversation that hasn't left my head. Great friends will challenge your thought process and yesterday I was confronted with the problem with 'even though'.

How often have we, as lesbian and gay people, heard someone say something like this to us:
"You know, I think you're (fill in the adjective.... nice, wonderful, awesome, intelligent, great....) even though you're gay," or, even more delicately put, "you're the way you are. "

I know that when people that have become close to me or that I have admired have said something like this to me I have felt good about it. I have felt like maybe I have been able to change their prejudice, certainly where I am concerned, but perhaps on a broader scale.

But in taking pleasure from that, have I actually perpetuated the prejudice?

Here's the thing.... no one would ever get to know someone and then say "You know, I think you're a great person, even though you part your hair on the right side." And the person that is said to would never be happy that someone said that, assuming they believed the person saying it was serious.

That seems like such a mundane comparison... a hair part compared to someone's sexuality, but is there any difference? When you tell someone that you think they are whatever wonderful thing you want to say, but qualify it by pointing out the thing that you think makes them different from the rest of the population, you are taking the time to point out they are different. Is the message being sent that they are LESS?

The 'even though' phrase implies that whatever follows is something negative. There are other phrases I have heard too... in spite of.... regardless of the fact that... in this context it seems the next phrase is something that the speaker believes is perceived as a negative thing.

I don't think that most of the people are intentionally trying to tell me that I am less of a person by saying 'even though'. In fact, I think most people think that they are trying to convey that my sexuality isn't a big deal to them. But in my acquiescence of their statement, am I actually acknowledging that I am, in fact, less than they are? At the very least, am I buying into that implication that I am different, in a negative way?

Indeed, I recognize that all people ARE different. We are not clones of one another and we did not all get raised in the same household and environment. Being different is standard.

The problem comes in when a difference is picked out that then becomes the thing that society uses to define you as a lesser person. Being black. Being Jewish. Being Japanese. Being gay. It IS how prejudice is born.

Something to think about.

Perhaps the next person you meet that you like, and you want to share that feeling with, simply say.... I think you're a great person. Maybe that person is gay, or black, or Jewish or has red hair.... just send the message that you like the PERSON.
Posted by TJ Moutard at 9:37 AM No comments: